Move over, summer berries and stone fruits—'tis the season for a cornucopia of fall fruits, including crunchy apples, chewy figs and tart pomegranates. By taking a page from the playbooks of orchard chefs, home cooks can flex the unique flavors and health powers of these autumn delights with savory mains and sides.

Fall fruits boast many healthful properties, from the apple’s plentiful soluble fiber and vitamin C to heart-healthy lycopene and beta-carotene found in orange-skinned persimmons. Pears are also loaded with pectin, which helps lower cholesterol, fight diabetes and promote gut health. Opting for light, savory preparations of fruit such as seasonal salads and soups over sugary desserts makes them an even healthier choice.

Healdsburg, California, restauranteur Kyle Connaughton creates dishes highlighting different fruit varieties for his restaurant’s 11-course menu, which changes daily. “This region was actually known for its heirloom apples and cider-making long before it was known for wine. We have these incredible heirloom fruits, including experimental varietals from the 1800s that no one even knows what they are. So many varietals got lost in the quest to grow fruit bigger and faster,” says Connaughton, who runs SingleThread Farms with his wife Katina. Their 25 acres include an heirloom fruit orchard, olive trees, beehives, grapevines and chicken coops that supply fresh ingredients to their three-Michelin-star restaurant.

“Some pear varieties are very crisp and dense, and poach and roast well, whereas other soft-skin varieties are better pureed into drinks or sorbet,” says Connaughton. He creates dishes that celebrate all of the season’s bounty, and in California, fall brings persimmons and Dungeness crab.

“Persimmons have a fibrous texture that don’t blend well into sauces and don’t freeze well for things like sorbets, which we like to make with other fall fruits like pomegranate. We prefer to use them in savory dishes, like a first course of cold steamed crab with persimmon.”

The orchard also grows Asian pears, which SingleThread Farms tends to use raw, often paired with raw fish. “Asian pears are very crisp, but not incredibly sweet, with an undertone of acidity. It has the watery crunch of a jicama that makes a nice backdrop for raw fish dishes like sashimi,” says Connaughton.

While the restaurant’s innovative menu focuses on small bites in curious combinations, the Connaughtons frequently have a simple family meal before the dinner service. In autumn, they will often toss together a salad featuring local goat or blue cheese; bitter chicory, frisee or radicchio greens; roasted fall hazelnuts or walnuts; and figs, persimmons or pomegranates from the orchard, served with a vinaigrette made with pomegranate molasses and macerated shallots.

The pink-fleshed, mountain rose apple, an autumn specialty of the Hood River Fruit Loop region of Oregon, often makes its way into salads at the dinner table of Katrina McAlexander, a third-generation farmer and owner of Grateful Vineyard, in Mount Hood. This 51-acre orchard and vineyard, brewery, winery and tasting room boasts more than 500 fruit varieties, including 150 kinds of apples alone. Grateful Vineyard hosted the cooking competition show Top Chef this year for a Fruit Loop challenge, with competitors coming up with savory dishes such as pear risotto and scallops with an apple shallot relish.

McAlexander’s fall salads often feature fennel, herbs and arugula, topped with croutons made from leftover pizza dough. Pears and apples from the orchard also get pickled, a nod to McAlexander’s Swiss heritage.

One of the vineyard tasting room’s signature dishes is an orchard pear pizza, with Anjou pears, caramelized onion and other savory ingredients on a base of olive oil and a long-ferment crust. The kitchen also uses pears in a vegan ceviche, tossing them with red onion, tomato, cucumber, cilantro and lime.

As the weather starts to shift, fruit adds a nice dimension to warming soups for chilly fall days. Adding cooked apples or pears to classics like puréed carrot or squash soup provides an extra dose of sweetness and fiber; sneak in fall greens like kale for even more nutrients. Fruits also help fill out hearty grain bowls alongside fall veggies like carrots, arugula and sweet potato, particularly paired with nutty grains like farro.

Add minced onion in a small bowl with the vinegar and let marinate while you prep the salad.

Chop 1-½ pears and save remaining half for fanning and decorating the salad.

Add cooked barley, chickpeas, pear, sun-dried tomatoes, arugula, parsley and feta to a large bowl. Mix the remaining dressing ingredients with the vinegar and red onion, and whisk until combined.

Pour dressing over salad mixture and toss to coat. Taste and season with additional salt and pepper, if needed. 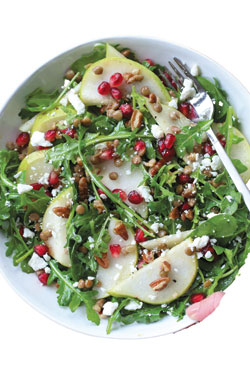 Pour a desired amount of dressing onto the salad and toss. Store the rest in the fridge.

Read 345 times
Tagged under
back to top

We do not necessarily endorse the views expressed in the articles and advertisements contained on this website, nor are we responsible for the products and services advertised.

The information contained herein is not intended to diagnose, treat, cure or prevent any disease or medical condition. Always seek the advice of your medical professional.